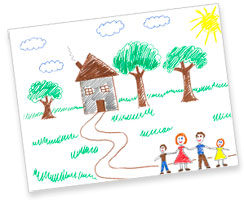 This mentality developed over Thanksgiving Break. The same words kept ringing in my head yet I wasn’t able to write it. Now it is Winter Break, or three weeks later, and the same words resonate within. The inspiration takes priority and manipulates my fingers to dash upon this keyboard.

When a child is asked, in elementary school, to draw a picture of home one could imagine that it would pick up it’s crayons, scribble in a box with a triangle on top to make a house. It would then draw a rectangle on top for the chimney, a rectangle on the bottom of the big square for the door, and two squares where the upstairs would be to draw windows. This ideal picture, though, is not the important part. The important part are the stick figures on the side of the house that stand there with their smiling faces. It’s not even the people that make it home. It’s that their happy that makes it home. I’ve never heard one student nor teacher say that once.

But you see, when I come home to see Thousand Oaks bask in its innocent sunlight, it’s not the crayon image that I take in. It’s the paper itself that contains the picture. First I observe the edges, where shriveling corners that never shriveled before begin to cave in. Then I see the wrinkles, even the ones under the lines of crayon, that seem to be deeper than before. And then of course, the colors themselves – somehow they fade ever so slightly. Only the accustomed eye could notice this. It all becomes so great to see it once again yet so melancholy all the same – the double edged sword!

Aside from this, the best of memories from home become the worst. Since when did daydreams become nightmares? No one warned me of this yet this is the life I always wanted. There were two options I could have pursued had I really put that much thought into it: 1) Become the Grinch who stole Life and forever remain the troll under the bridge who only takes and never gives or 2) become a producer to the elements around me as to distract myself from reality’s burden. From this, I am proud to say I have taken the better choice. But it wouldn’t have been possible without college consuming my life.

Now I’m a sponge, sucking in the knowledge of the cultural melting pot’s education system. I try to give back but the process is slow so until then I’m a vampire at most, taking as many souls into my system through the consumption of desired blood. And with that, I grin the widest and am even described as a gentle spirit when on the inside I remain an inferno that just waits to reek havoc. Don’t believe me? Haven’t you ever heard that those who smile the widest tend to hold the darkest burdens?

It was fueled when she left. She taught me the first and most difficult lesson – How easy it was for pure memories to become torturous. There it was that we made out so passionately in the dark. There it was where we hiked and did our photo shoot in order to relieve a bad day. There it was where homecoming defined our relationship as whole. For two years they taunted me in my sleep. It all falls apart now and there is nothing more to say about it. While the avalanche of memories is unstoppable I did learn to “live like water”, as Bruce Lee describes, and use the burden to my advantage. I take this weight and use it to pull me deeper into depths I could have not imagined. I am in a much better place now. To my ex, I say thank you and wish you the greatest of happiness to come throughout your defined and enriching life.

Still, I am home now, and that is all I can be thankful for. In retrospect, my problems are nothing. There are wars, genocides and terrible acts that occur 24 hours a day, yet still I choose the most dramatic dialogue in order to sound like a wounded soldier. It’s rather pathetic really. Through words I impersonate something I’m not. My problems are nothing compared to the world and the reason for it is… because the only thing I know of the world is Thousand Oaks, Oak Park, San Francisco, parts of Detroit, Hawaii, parts of Israel and that’s it. The rest of the world is seen through the window I call YouTube. So why do I use such language? Because “Language was meant for one reason, boys – to woo women” according to the Dead Poet’s Society.

So yes, this is me and that is my home- the double edged sword. If anyone dare delve to where I reside be my guest. I will show you all of my triumphs and downfalls with the widest grin on my face. But if you decide to remain that unrealistic troll, better known as the Grinch who stole Life (from him/herself) then remain absent and come back when your maturity outweighs your habits.

‘Till then, come what may.