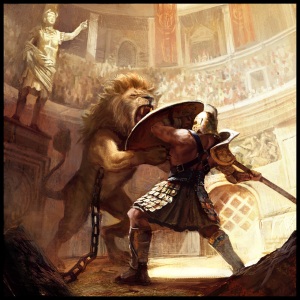 The Coliseum’s crowd chants a name over and over. Not a sound beyond that dominates the land. Outside are wheat fields with winds that brush through the plants but not even that little reminder of peace is heard. Just the loud and enthusiastic chants of the blood-stained Coliseum can be heard. Outside, peasants try their views through cracks in the walls, just to see the behind the scenes of it all. The whole nation was there to witness; One warrior versus three lions. Their weapons? Razor sharp teeth followed by the instinctual and pre-today drive to kill. With a thick coat of fur, the kings of the jungle are chained with heavy bands of metal around their necks but even this metal can’t handle the already tense layered muscles of the unsatisfied beasts. The growling can be heard and the peasants from outside are scared for the lone warrior. What does the warrior have? A shield. An average sword. Shin guards. Sandles. And of course his iconic helmet. Simple yet plenty, the warrior is known for this plain and somehow effective combination.

The crowd chants his name more and more. The stigma only arises. Tens of thousands of viewers feet stomp enthusiastically on the floors causing tiny pebbles on the ground to rumble. From a distance, a dust cloud of excitement covers the upper layers in orange clouds. Below, the lions in their cages become more and more impatient. They haven’t been fed in a day and they know dinner is approaching quickly.

The warrior sits their calmly in his chamber. It wasn’t the first rumble he felt. Yet still his neck and shoulder muscles were tense. He stretches his head from ear to shoulder. He does the same the other way. One more fight and he’d be free. One more fight and he wouldn’t have to bear the humiliation of staying a fighting slave of entertainment only to be forgotten by death. This was the most important fight of his life.

The chanting has become faster outside. He can the time has come. Suddenly an adrenaline rush fueled by the enthusiasm of the crowd inspires him to stand up. Two servants on both sides of him run up and wish him a “God Speed” with deep sincerity but the warrior is too focused. His eyes are locked forward yet his senses feel everything. From the cold armor clenching his legs , to the sound waves bouncing off his skin not a particle of dust around him became unnoticed. Even the taste of past warriors who had sweat, cried and bled could be tasted in the air in that moment.

Suddenly, the stadium goes quiet. This is the moment. A horn blows. The doors are pulled open. The sun beams through and blinds the readied warrior but it is no matter now. He charges out into an open stadium only to find there is no one there. In fact, there aren’t any lions waiting for him nor people cheering him on. The stadium was absent. Wait. Never mind. There was no stadium. Just a down sloped neighborhood. What the hell, man? The 29 bus passes by the house speedily on its everyday schedule through the city. A car races up hill as it completes two tasks- fighting the battle of territory against pedestrians over the usage of the road and simply getting from point A to point B. A savage and rather dynamic world becomes a colder and more straightforward sight.

Him and his average bodied self continues to walk through his day, not with armor, but instead with jeans, a tee shirt, a grey vest and sometimes a backwards hat that says, “I’m a frat star” without actually saying it. He gets to campus listening to the same playlist that he plays every other day. He sees a few friends on the way and gets to class. The teacher lectures on and on as the people outside the windows live life on and on. The teacher lectures on about “How the founding fathers… blah blah blah… something I’ve heard before…” but all he hears is this:

Hey kid, this isn’t what you thought life would be, huh?

How could you? You’re a naive little kid trapped in a man child’s mind. Not now, please.

This isn’t what you thought life would be, though. That’s not a bad thing.

Yes it is. Not it isn’t. Relax, man. Did you actually think you’d be this heroic gladiator?

In my own symbolic way, yeah! Shut up, Chaz. You are being ridiculous right now.

Maybe you should fuck off. I’m trying to listen to the lecture. You know you can’t win this battle. Yes I can! No you can’t! Yes I- You’ve been overbearing, naive, selfish and haven’t met your full potential. In fact, you not meeting full potential is the saddest and most tragic feature. I got time. Yeah but your not up to standard!

So what do I do? You stop living this imaginary life! Who do you think you are? Goofy Calvin and Happy Hobbes?

No! What? So you can just tippy-toe your way through life like some of the other degenerates you know in life!

You can’t talk about them like that! They’re my… well… They’re not friends, Chaz. They’re not even acquaintances and you’re way better than them.

I don’t have anything to say…

Life isn’t what you thought it would be, isn’t it? No, I suppose not.

Why so sad, though. That’s wonderful! Why would you be?

Life could have been a daze of green smoke with you lost amongst it until the radiation got to you. But you played that game of chess like a champ and now your able to pull success left and right. I won’t tell you that the world is your oyster but this world is your oyster and its time to pry it over and gobble down the insides like a man!

You think so? Of course I do. Why look we’ve already changed roles!

We have? When this conversation started your conscience did the talking. Now just you are doing the conscience. See how our roles switched?

The point is, if you want to live your life like a gladiator, go for it… Right?

It’s just me now. My conscience is gone. I’m alone in this room filled with familiar shadows and smells and tastes. It’s dark and dusty. Slowly a sound hums from the distance that sounds so familiar… Some sort of cheering of encouragement… My name? The ground begins to rumble and pebbles hop back and forth between the sound waves. I hear whispers to my left only to see dirty peasants and their children squeezing their sights through the cracks as I am their spectacle and new found mystery to the world. I had done the same thing once upon a time… How could one man face three lions with basic armor that barely covers all sections of my body? The crowd has become louder now. Dust rises from the stadium. My bench becomes a weight to my motivation so I stand proud in front of the tall wooden double doors. My sword is tilted away from me. My shield held firmly by the left hand. Three lions await me on the other side of that door. I shout, Yes! I shout for them to open the doors. The doors open! The crowd cheers my name! I charge into battle. The lions break from the chains and come to make their dinner. I raise my sword back and hold my shield in front without blinking in my charge. The hunter becomes the hunted.

“See you all next week,” the professor says cheerfully. Confused, he wakes up and sees a class hastily leaving the room. He does the same and collects his books and leaves the room. This time, three lions wait outside for him. They all walk together and argue happily ever after.