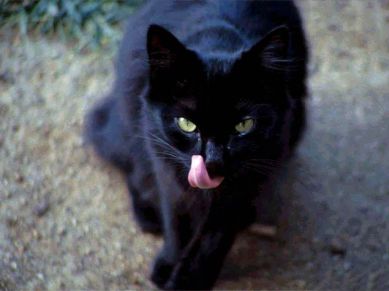 Every night that I am left with no other choice but to walk home or for the random reason of inclination to simply stroll home for the nice breeze, I take the direct route straight across my school going several blocks up the hills of Ingleside while crossing two main roads. The only road I have to turn on in order to go home is a street called Ralston Street. I’ve walked up this steep road many times and have found myself huffing and puffing by the time I get to the top corner house that I live in. While this is an accomplishment, my goal for getting home does not include me losing a good hundred or so calories. I always knew that if I could change one thing about getting home it was the angle that very road. But what makes this road worthwhile is not the accomplishment nor any form of desperation for needing to be home in the first place but rather a friendly black cat.

One night, my roommate and I were walking home when a black cat emerged from the shadows of the low bushes that guarded a neighbor’s house. The neighbor’s place was that of a dumpy property where the owners, appropriately so, were junk collectors. This cat, in the pitch black night blended in and made his presence almost so quickly that it startled us.  Surprised, we received the cat’s presence with gentle petting and scratching. It began to purr and rub up on us and instantly we fell in love with it. To my roommate, this was a much more meaningful experience as he had recently lost his cat back at home near Los Angeles. Ironically, the cat had looked just like my roommate’s with its black coat and mysterious laid back presence. Now I, being a dog person, was surprised that I found the ability to love such a thing but I did and while at first I was cautious of any other vicious and nonsensical attack that a cat would normally do (according to my previous experience) I felt completely safe. Sam and I left the poor cat, as it was time to go home, and all we could talk about was how cool and gentle that cat was. At the time, I knew that to my roommate it meant much more to him.

Next thing I knew, I would see this cat on numerous occasions and would stop to have pretend one-sided conversations with this cat that probably only cared about the textures he felt against the fabrics of my clothes and roughness of my hands. Sometimes he would even drool from pleasure. Nevertheless, I grew to love this cat. In my head, I thought, if only more cats were like this, I would actually like more cats. I loved his uniqueness. But with uniqueness comes identity and with identity normally comes a name. I soon realized that this cat’s lifestyle was a blacked out mystery that was just as black as its fur.  It was then I named the cat Mr. Ralston after the street. Now you not only had a face, I though, you are my friend.

From friendship came love and from this love I gathered that he was basically my pet… that didn’t live with me or have any official saying that he was mine. Mr. Ralston, though, truly was the best cat that I ever met.

One day, I was walking home when I saw an open house sign on the barren front lawn of the house the cat belonged to. To my surprise I decided to go in and see what the house had to offer. It was a rather dirty and clustered place full of junk, as assumed, yet there were some items of surprise. Items of fascinating topics included an old bb gun rifle, a civil war sword, and large projector that was probably used in the first existing movie theaters of this nation’s cinematic history and a series of medals won from war. While looking at the cool findings of what felt more like a tour through a museum I grew more and more saddened. Why? This meant Mr. Ralston was going to not exist in my life anymore.

It was then that I made it a point to walk everyday back home a night time no matter how sketchy it got or how physically tired I was. The moment I turned right on Ralston Street I began snapping my fingers and clicking my tongue against my back teeth but by the time those neighbors left I never saw Mr. Ralston again.

Three nights ago, I walked home after midnight meaning that the buses weren’t operating anymore. It was cold and foggy and I expected nothing more than a typical lonely walk home that occasionally was illuminated by the street lamps above.  I took the right on Ralston Street to head home the usual way. My earphones were blasting an intense rap song that motivated me to go faster up the hill. Out of caution, I would look all directions every three seconds. At this point I’ve walked 3 houses away from Mr. Ralston’s original home when I feel the cautious instinct of looking all directions in this hour. I turn around and like spotting a ghost in your hallway I jumped out of sheer shock. There, under the spotlight of the streetlamp, separated from the darkness in the shadow’s abyss, Mr. Ralston sat contently as if to say, “I’ve been waiting for you.” Stunned, I slowly took my earphones and fully faced the cat with surprise. The impatient cat waited for me by waving its tale seconds after the previous wave and eventually decided to walk up to me to prove its physical existence. As it got closer I knelt down and met with the real living Mr. Ralston.

“What the fuck are you doing here?” I asked wide eyed.

The cat already was meowing a full story to me and rubbed up against my hands. I adjusted myself and sat fully down on the sidewalk as it purred and danced around my body. From one hand to the other it transitioned itself strategically against my strokes and soon enough we were reunited already. In a few minutes time of concentrated love I suddenly felt at sync with the animal; a pure transfer was soon equivalent as he found pleasure and I found tranquility. But I knew I had to go. I couldn’t keep the animal because I would be kicked out of my house. I gave it one last stroke  down its back and a good scratching to the top of its head but I knew it was time to go. Once I stood up, the cat understood the message and began to follow me up the walkway. To my surprise the cat almost went the whole way up to my place. A part of me made a bet with myself saying that if the cat made it all the way to my door I would have to let it in at least for a night. Soon enough, though, the cat stopped and grew realistic thoughts towards our friendship. It stopped and sat and watched me go.

I do not know what our relationship has in store for me next but it is a unique one for sure. What it means or what it serves to me, again, I am unsure. The only thing definitive is how much I love that goddamn cat.